Our adventure started after sleeping in a brothel

and ended helping Venezualans and goats cross the border. 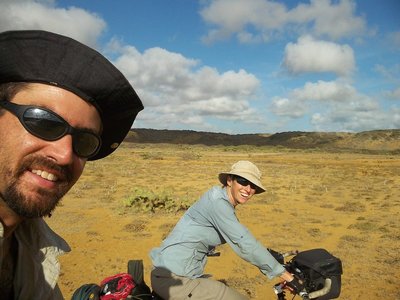 We were biking the Guajira to the northen most point in South America, Punta Gallinas.

It was going to be five days of extreme suckage. We agreed to it, prepared for it, and felt that the outcome would be worth it. We didn´t pay too much attention to the guidebook description of ¨dust, diesel, and smugglers¨. Instead, we focused on ¨Look...there is a road on the map; that means it is doable,¨ completely forgetting about the road to El Guayabo, also ´doable.´

La Guajira: summertime Arizona heat and landscape, summertime Louisiana humidity mixed with summertime South Dakota winds. Throw in a handful of the last Indigenous Wayuu Indians in Columbia herding goats on the barren landscape, drinking goat blood because there is simply no water, and you have the La Guajira.

We didn´t bike in Willy Nilly. Oh no. We located towns on the map with food and water--verified the sources with ecotourism outfitters who looked at us with amusement, and doubled up on food and tripled up on water. But for some reason, whenever we saw a red flag, we pretended it didn´t exist. We were headed to Punta Gallinas. 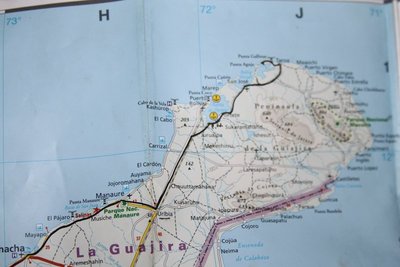 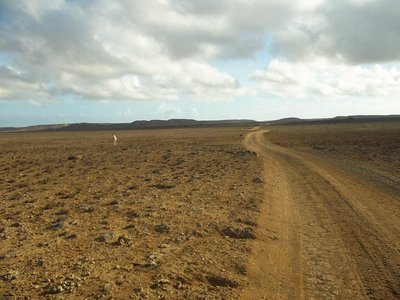 Red flag *1 - Head north on a man dirt road for 8 hours with little to no sleep...as we slept the night before in a brothel (didn´t know it was a brothel until after checking in). Turns out, those places are really loud.

Red flag *2 - Leave Colombia behind and bike onto a reservation, where people are no longer waving, giving the thumbs up sign, but looking at us with ´what the fuck are you doing here and where are you going´ expressions.

Red flag*3 - Notice how everyone is completely covered with face masks and scarves, shut off from the wind, dust and sun while you have bike shorts and a small brimmed hat.

Red flag *4 - Ignore the shouting from every car ¨where are you going¨ as they speed off ahead, and ignore the communities replies of ¨Punta Gallinas, that´s really really far¨when you ask for directions. In fact, ignore the police when they tell you the towns you were headed to for food and water no longer exist.

Finally, Red flag *5 - when you find the ´main dirt road´ headed east, don´t pay attention to the fact it is not a main dirt road, but a jumble of small roads headed in every which way, mixed with bike paths and donkey trails. 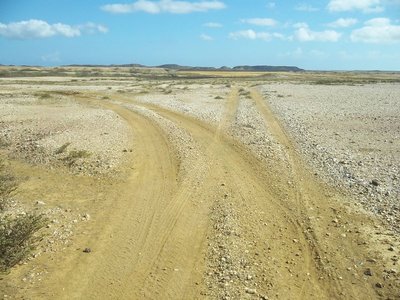 We ignored the red flags. We were headed to Punta Gallinas. 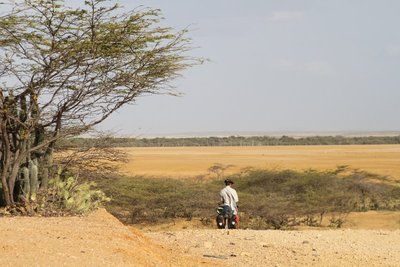 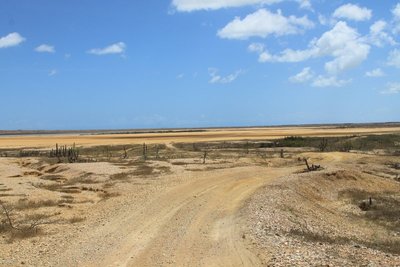 I won´t lie. It wasn´t easy. If there wasn´t a headwind, which was rare, we were pushing our bikes through beach sand and hiding under cactus for shade. Jared grumbled ´Type 2 fun, type 2 fun´meaning he will enjoy this later when he has a beer in hand on the beach and can look back at this...meanwhile I watched our water supply dwindle and debated whose idea this really was. But we had a motto. Stay on the biggest road, when in doubt, go left. 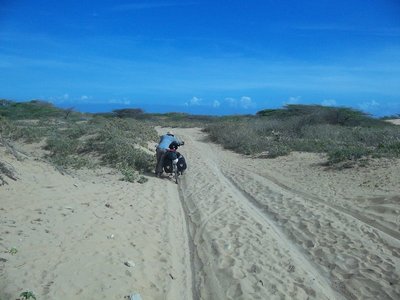 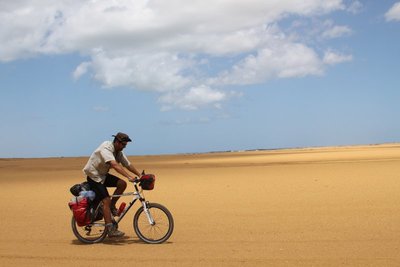 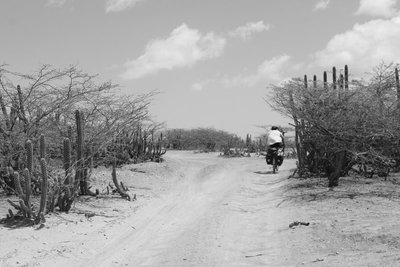 And sometimes it worked. It led us to Puerto Nuevo, our first real town (not on the map) with provisions and safety. We were welcomed in after 11 hours of biking, and many people verified we were the first bikers to find That town. Oscar and Alejandro took us in, fed us, and we consumed the entire towns juice supply and quadrupled our water supply for the next day. 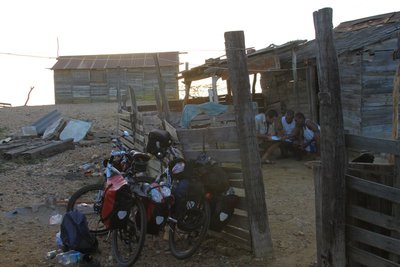 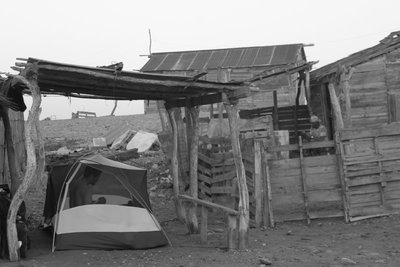 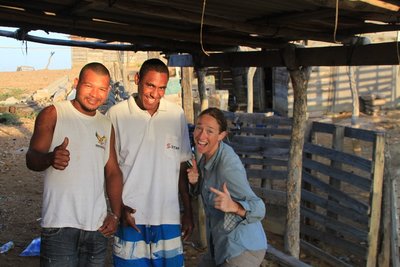 Day 2 was twice as hard. Wayuu Indians blindly waved off to the north, northeast the direction of Punta Gallinas while reminding us it was really really far, ´7 days away.´ The stores with water and food promised by Oscar/Alejandro were closed, and we were down 4 liters each, unknowing when/where to replenish. But we were never alone. Just when we thought we were in the middle of nowhere to whither to our death, a kid on a bike would come out of the cacti jungle. 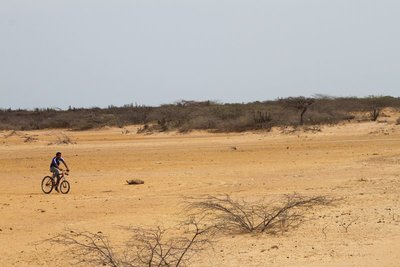 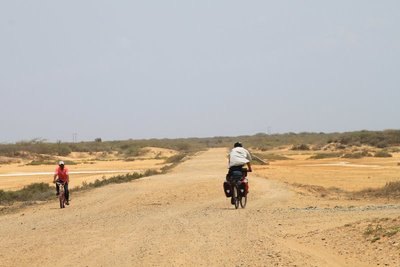 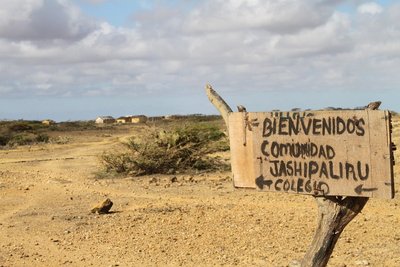 Or we would go around a corner and interrupt a classroom, kids running from the teacher to look at us. 3 different teachers from 3 different communities stated ¨After this school, there is nowhere, nothing.¨ We said thank you and biked on. Jared said we were chasing a unicorn, a beautiful thing that does not exist. 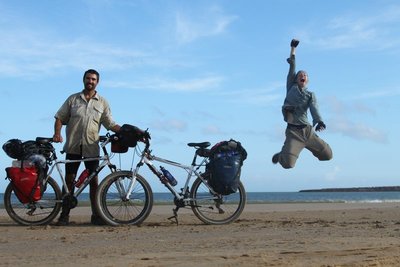 32.5 hours of biking start to finish, we found our unicorn. Punta Gallinas. The most northern point in South America. 8 families, Wayuu indians, 200 people. We filled our bellies, laid in hammocks, and realized our trip was only half done, we still had to get back home. Oh the heaviness on the shoulders. 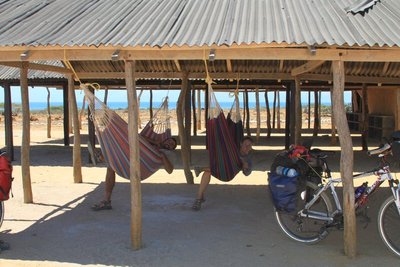 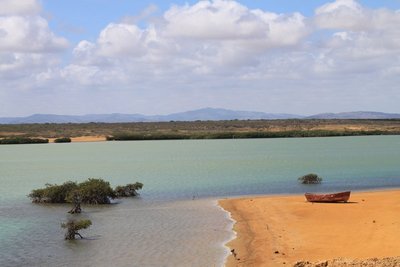 Turns out, there was a short cut. And we found ourselves friends with a drunk Wayuu bargaining with a blind fisherman to paddle us across a narrow channel of the ocean, cutting off a half a days ride. His daughter barked out commands -- Left ... Right ... You are putting us in the willows-- in their native tongue while he blindly paddled a canoe with a 2 x 4. We were now biking up a new peninsula back to the main road. 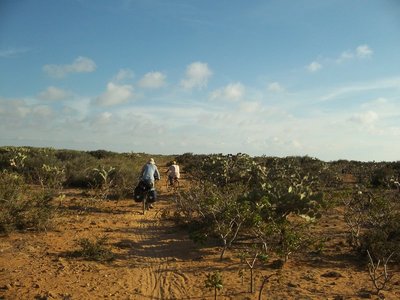 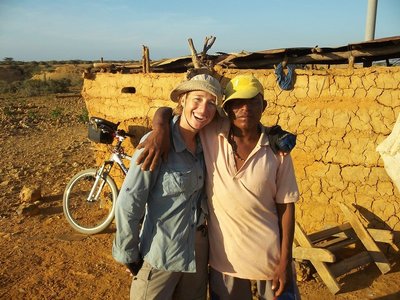 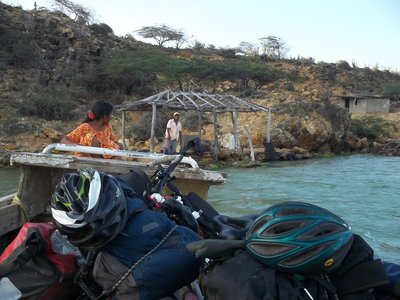 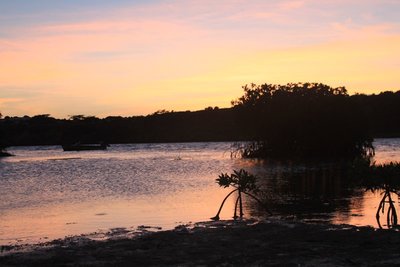 It was day 4 when we knew we would make it out alive. We could slowly struggle back and miss an accordian and whiskey folk festival with a free place to stay with the police chief. Instead, we came upon an overheated Venezualan truck heading back to the border. A little negotiations, a hint of cash, and we were wedged between goats, corn, Venezualans and bikes heading towards the music. I debated whether the car ride was any faster than my bike, with the constant overheating, detouring to each community, and the driver falling asleep at the wheel. But we made it out. 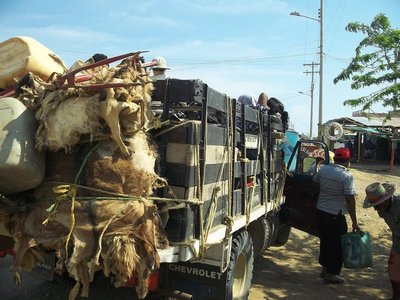 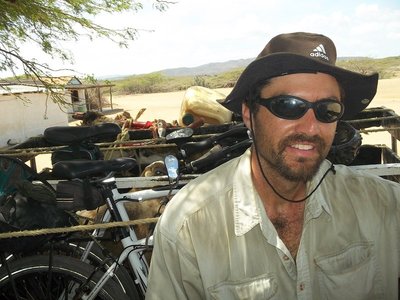 10 lbs lighter, 2 shades darker, 6 years exactly after Jared and I split our first pineapple and decided to go steady. We made it hither and yon and found the unicorn. Now time to dance to the music. 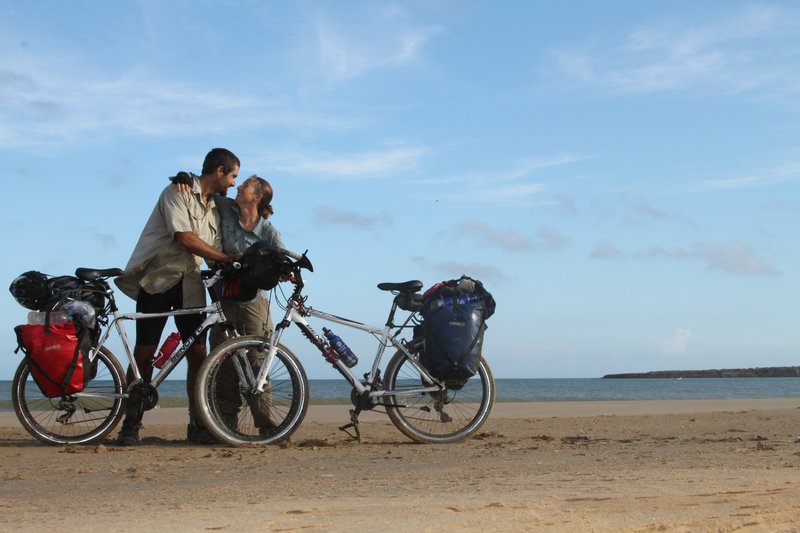