Riders of the storm

living under the bridge downtown 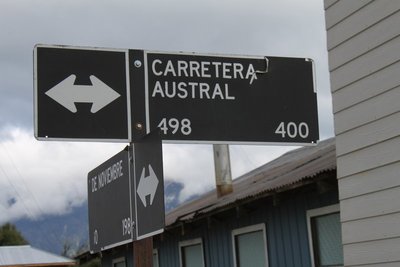 Riders of the Storm, sung by the DOORS, circulates through my head as I`m heading down the Carreteral Austral, southern Chile, Patagonia, one of the most famous rides in the world for bikers. Route 7. That song and Under the Bridge by Red Hot Chili Peppers, which I sing to myself as I brace the rain and winds. Other songs include Lalalalalala, writen by me, and `Why oh why are you an asshole driver` also written by me, which I will patent in times to come. 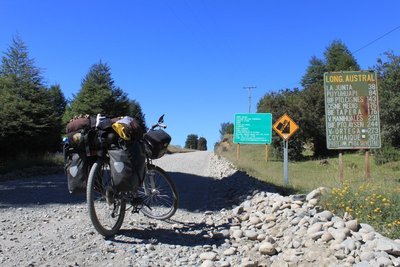 These lovely lads have blessed me with their presence twice. They haven´t had the easiest of trips, with stitches and broken bikes to boot. I fixed the bike... but wasn´t there to put in the stitches.... or I would have busted out my dental floss. 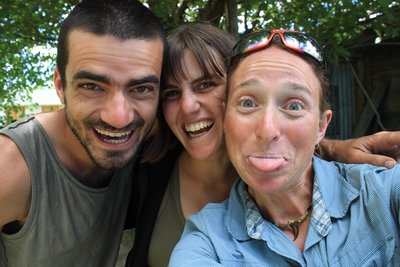 And this young lad I met on the road and thought to myself, some contractor Had to hire his uncle to help with the job... and the uncle insisted on working old school style. Tractor or ox -- they will both get the job done. 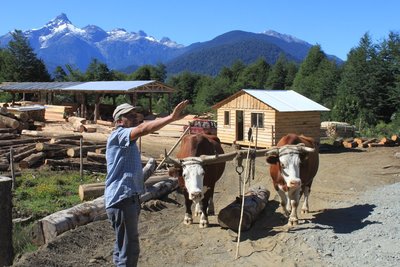 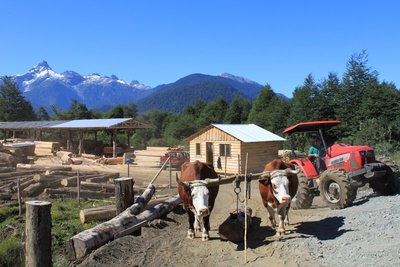 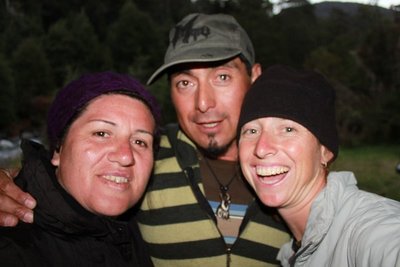 Shimmy and I met on the side of the road. Shimmy and his wife are hitchhiking to Cohaique at an interesting pace. We leap frogged each other; they were waiting for a ride, I stopped to chat, then they passed me in a truck and I cheered, then I passed them on the side of the road and said see ya later. We met up that night under their bridge. I was about to camp next to it, in a beautiful spot by the river, when they found me and invited me over. They shared potatoes and eggs, and I told them of my dreams biking in Patagonia. Shimmy´s dreams included meeting his dad for the first time since he was 7 years old. He just found out his dad, age 78, was in Coihaque and they set off to accomplish that dream. Noble adventure, dad wasn`t informed of the situation and I wish I could be there to see the dream come true. Although Chileans move at a different pace. They are hitching about 300km, roughly 3 hours, and it`s taking them over 4 days. I wanted to teach them my professional hitchhiking ways from the past. They stay up until 4am, sleep into until noon, then hop along town to town with locals. If only they woke up early one day, and hit the through traffic around 7 or 8, they could be there in a day. But eh, who am I to say how to do it. They shared their potatoes and eggs with me, we spoke of relationships, and I made sure that while living under the bridge, I left my mark. Don`t worry, it`s biodegradable... and in a foreign language! If you look closely at this picture, you will see shimmy`s wife taking a full on bubble bath in the river... where`s waldo? 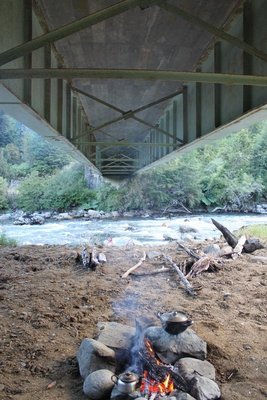 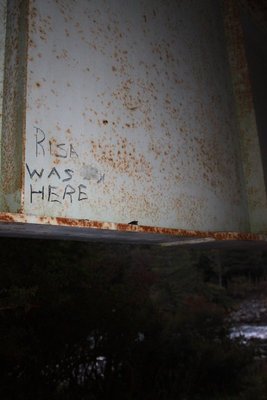 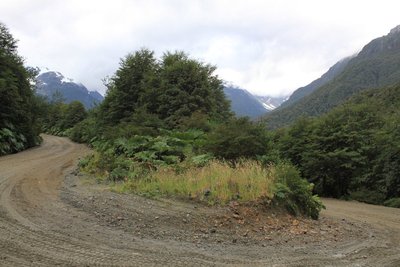 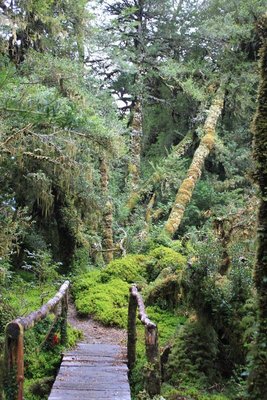 Heading south, and everyone I pass spoke of a cabin I was supposed to stay at, the biker`s cabin; it`s after a long ride up a dirt road mountain in the rain. I arrived at the cabin at dusk.... and it was fairly wretched. Wreaked of urine. Chileans make it their pit stop. I thought to myself, have I stayed in worse? The vacated house in Argentina... nope. The 6 beds, people having sex next door, lady kicking Lauren and I out at 6am hostel....no. How about being stranded at the Peruvian border in Zapita, where Lauren and I had to steal a lightbulb from the torturous bathroom to put in our room..... close. But I decided to sleep in this cabin anyways, because it was about to pour rain. 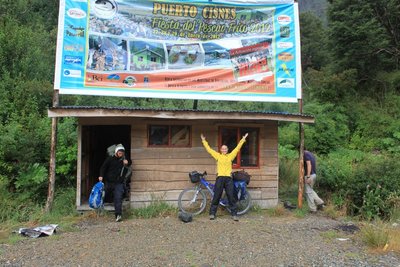 Around 12am, this wretched hole was my mecca. It poured through the night, and I slept warm and dry. It rained so hard, I thought my tent would float away if I was in it. And at first light, 3 isralians stumbled in after hitchhiking, having slept in the forest in a non-waterproof tent (whoever takes a non waterproof tent into the wettest part of patagonia is well, i will not say). They were drenched to the bone, everything wet, shivering and lost for words. Out of gas since they had their stove going in the tent all night long for heat (will not comment here about carbon monoxide poisoning.) I made them hot water, which they refused to drink because it made them colder? I thought maybe it was not having a shirt on, but who am i to say? And I spoke with the girl. She was happy to be with the 2 guys, scared to travel alone, because she wouldn`t know what to do in that situation had she been alone. I thought to myself, she probably wouldn`t have been in that situation had she been alone. But again, I put my dry clothes on, packed up my bag, and watched them hitchhike away... as they left their coffee, oats, oil, tuna and spork in the cabin as they ran to the first car and got a ride to town. free spork for meeee! 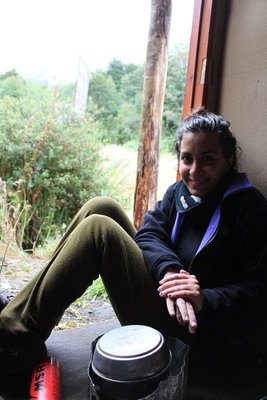 I, on the other hand, heard their was a fish festival in Puerto Cisnes..... 20 miles off my route on a dirt road in the wettest town in Patagonia. FISH FESTIVAL!! ROAD TRIP! who doesn`t ride to the wettest town in patagonia by bike? Landed soaked, muddy, smelly... to the best fish of my life! Hot, huge, 5 dollas for a heaping plate of fresh caught trout with awesome music and dancing to boot. Best fish festival EVER! Then i commenced with 3 pieces of cake, and rode back to the cabin. 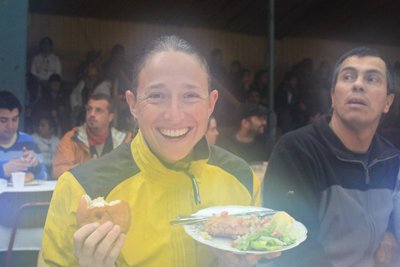 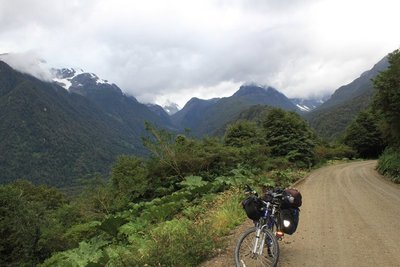 Was not excited about staying another night in the urine loving cabin, so rode on, soaked and slightly cold. Stopped at the first house, walked passed the scary dogs and told them to chilax, but bark louder so the owner would come out. Then I met Ricardo. I asked to sleep in his barn... he was an older man who lived alone and said he could use the company and invited me in. So warm, so cozy of a house. I wanted to open the door and say ¨Lucy, I`m hoooommmmeee`, but I didn`t think he would get it. Hung my clothes to dry next to the fire. No electricity. He shared homemade soup and bread, I taught him SPEED, a card game which didn`t work out so well since he had to hold each card up to the candle and squint to see it. We only played one round. i won. But I slept with 5 blankets, woke up to dry clothes, thanked him graciously and went on my way..... 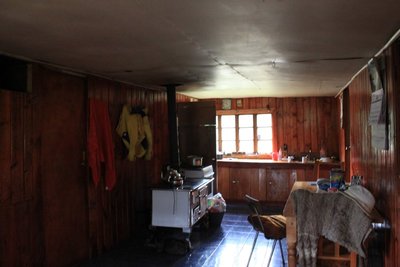 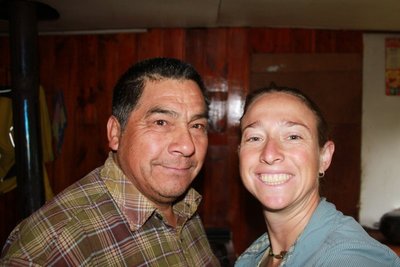 to the casa de ciclistas 2 towns passed. I always wanted to sleep in a church!!!! REMEMBER?? IT came true. This man, jorge, and his family, let all bikers stay at their place. He sees your bike passing by and runs after it, inviting you in. He lives the word of God: a quarter of his house is for the family, a quarter as a bike shop and accountant office, a quarter as a place to sleep for bikers, and a quarter as a CHURCH! And there was a sermon that night. I hummed hallelulah all night long in my warm bed. One of the few people who lives what he believes, and I love him for it. He once rode his bike in the rain and knew how nice it was to come home cold and wet, and thought about all those who don`t have a home to come to... and opened up his. Truly a great man. 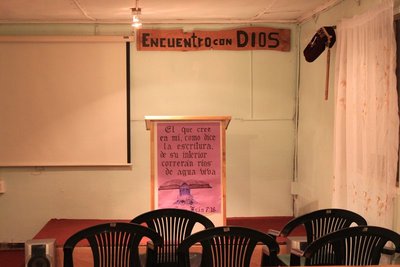 oh what a good day it has been. and this man started this town in chile. glad i don´t have his last name. 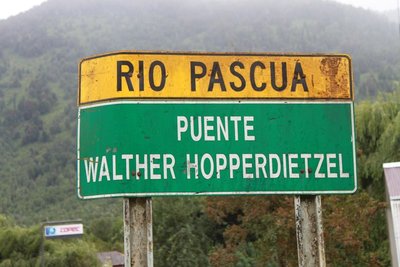