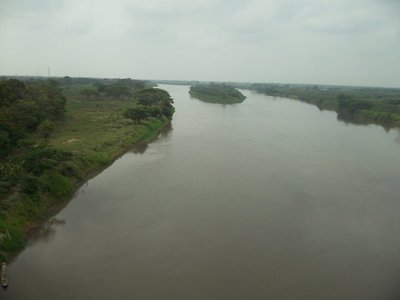 I don´t know why I wanted to bike to El Guayabo. I think because we had been biking over 13000 foot mountains daily for weeks and this looked like a flat place along the river, far from tourists and cars, possibly tranquil with hammocks and smiling children. Maybe the town was made of chocolate, or mangoes; it was simply calling my name. 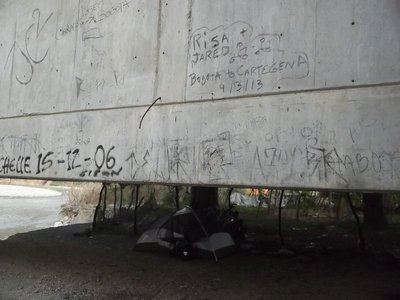 So after leaving a surprisingly small but happening town of amazing fruit salads and disco clubs, we headed off the ´secondary highway´ towards the dotted lines. It was about 100 degrees and muggy as all get out. After passing through 3 or 4 ´towns´that had 3 or 4 buildings at most, we ended up at a dead end/crossroads/river. There was supposed to be a bridge, but apparently the map was confused with some other country. After much staring at the store, we learned that the bridge no longer existed (since july?) and that the road on the other side to El Guayabo no longer existed... or ever existed. 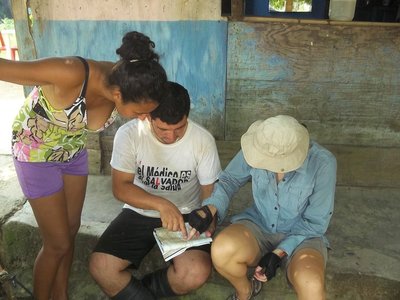 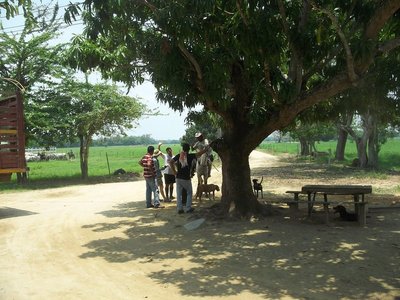 Yet again, map confused with some other country. Debating whether we should turn around, some horsemen arrived and stated that, yes the ´highway´did exist, and we could hire a boat to get across the river. During some phone calls to ricky for a boat, we watched the last of the bread in the store be bought by others, and questioned whether we would get stuck on the other side foodless and hot.

But it so happened that it was lunch time, and the store/family was having almuerzo. They made us a large plate of eggs-rice-beans-plaintains and then introduced us to each of their chickens, whom the mother lovingly adored. Delicious eggs, thank you chicken ´senorita.´ 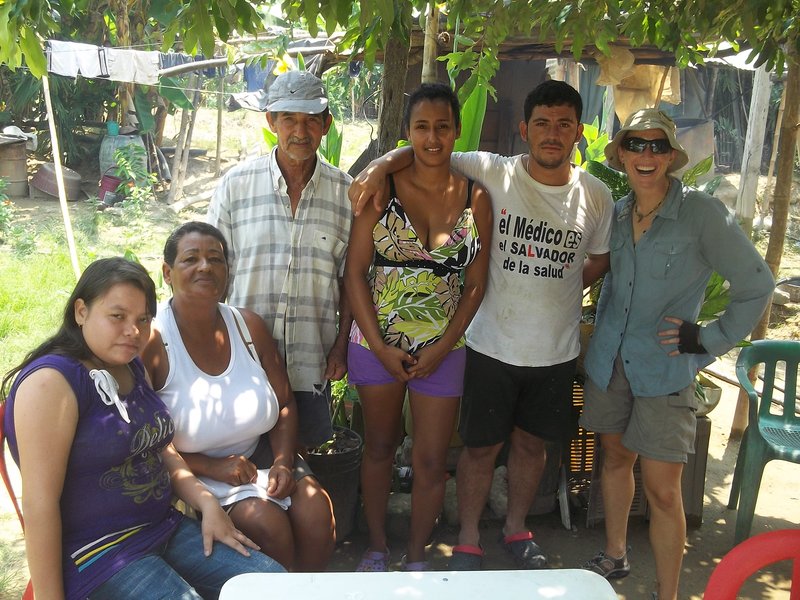 Time to start the adventure with full bellies. 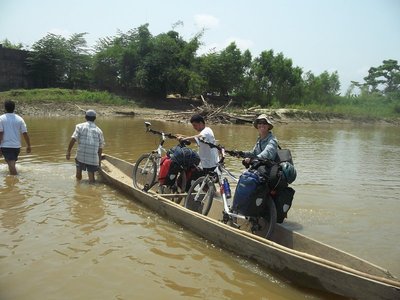 First, wade our bikes across some river in a canoe. Check. 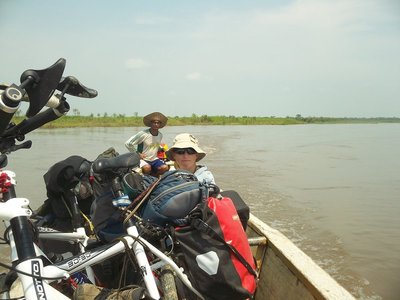 Then meet with Ricky and have him motor our bikes across a much larger Rio Magdalena, the famous river in Gabriela Garcia´s novels. Check. Then have Ricky direct us to the ´highway´and make sure we take a right instead of a left at the crossroads, also known as walking path. Check. Now bike along this ´highway´until we get to a town not on the map to ask for directions. Check. 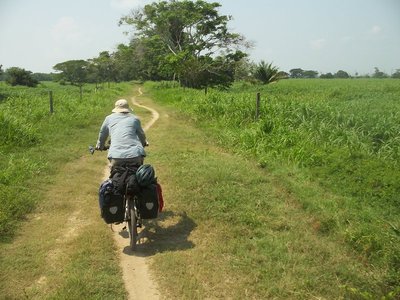 This town not on the map was not only much much larger than Any of the towns on our map, but had also been visited by Mennonites from the USA just the day before. After much explaining that No, we are not those Mennonites, and Yes we are biking through Colombia, and Why, because it is fun... as sweat pours down our faces... we are invited in to some mans house for ¨The BEST WATER IN COLOMBIA¨ he said. And it was! Filtered with minerals, rocks and all. He then had his son first lead us to the NEXT HIGHWAY that would take us to El Guayabo. 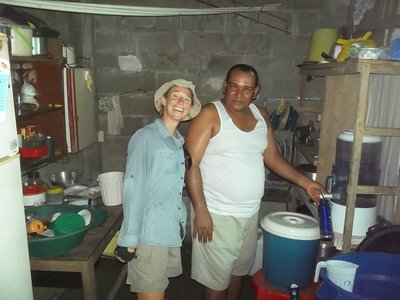 This road, the dotted lines on my map which a car is supposed to be able to drive on, is NOW an Overgrown horse path for 10 miles. So after biking this path in now 105 degrees of mugginess, we arrived literally out of the bush into El Guayabo. Wonderful El Guayabo.... the town that no one ever visits and as we learned, the government has forgotten about. 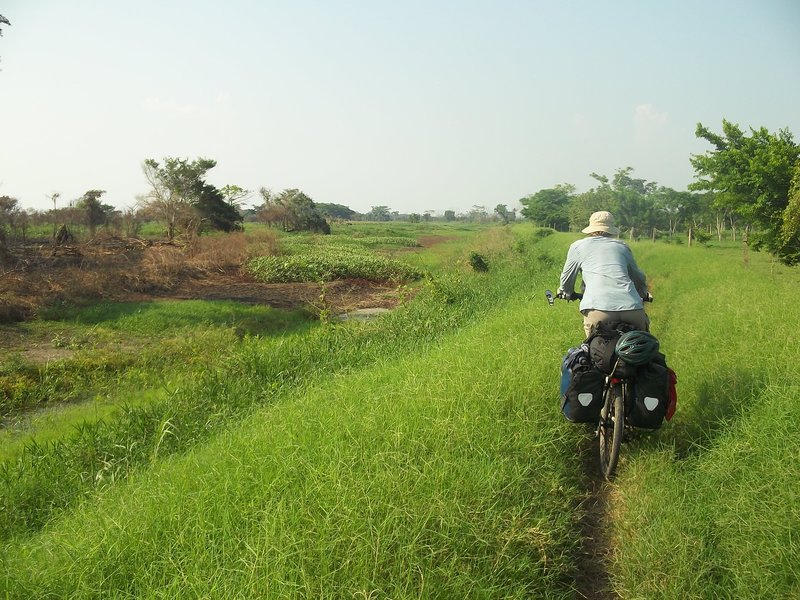 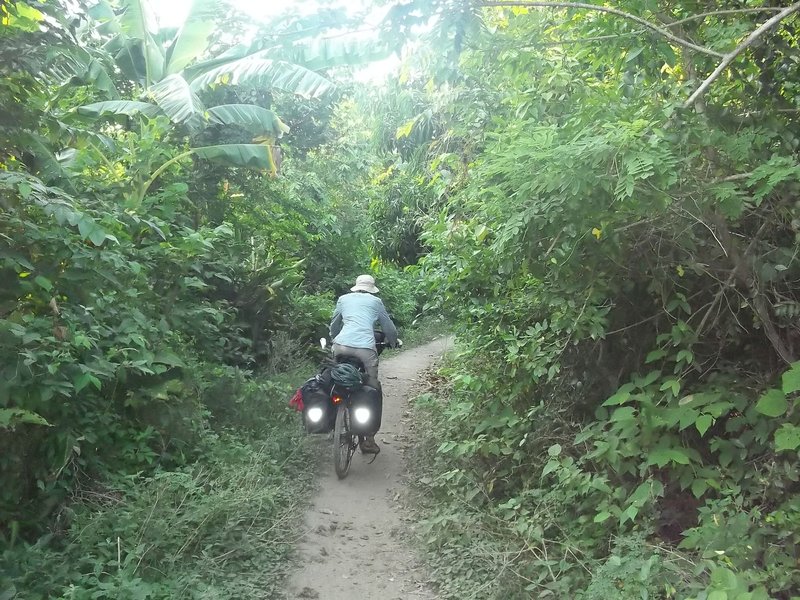 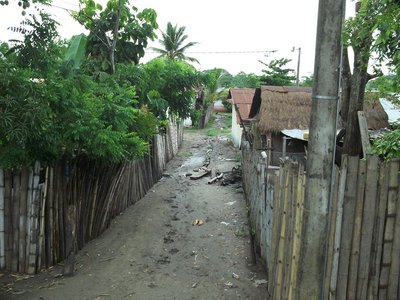 Needless to say, the town was leary of us. Two sweaty dirty smelly white people literally tumbling out of the bush. Doors were shut, eyes were peering out of broken windows. I found some old man and asked for a hospedaje (hotel). None existed. So then I asked to speak with the Chief. None existed. None existed?? So then I asked for a police station.... None existed. Then some old man said the Chief Could be the Nurse.... of course. Why wouldn´t the nurse in the town that Colombia forgot be the Chief? So I found Lila, Nurse Lila, also the bartender, pool hall owner AND Radio DJ. I explained our situation, and we stayed at her house that night. The bedframe was broken, springs were protruding from the mattress, BUT there was a fan. Which actually didn´t work because the town lost electrical power hourly. 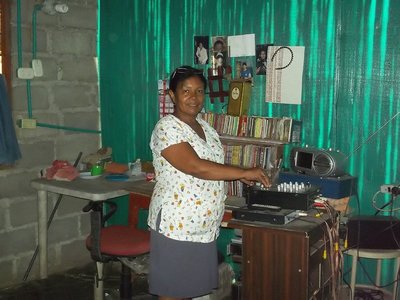 After the town recognized that we were not going to kill or convert them, we were immediately welcomed in, placed in two chairs in the middle of the street, given Coca Cola, mangoes, melted ice cream, then dinner while surrounded by at least 50 people/children who wanted to see us eat. We learned that the whole 500 person town was actually only from two families and that we were the FIRST PEOPLE from another country to visit since they could remember. 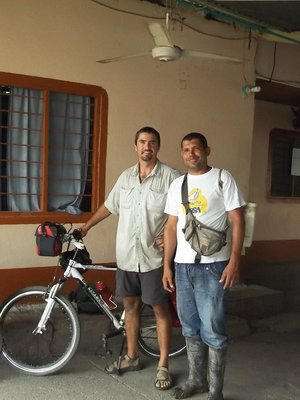 They couldn´t fathom why we would leave the main road in Colombia to divert to their town, (because it was fun?) and said the road north only became worse and thus, convinced us to strap our bikes to a motorized passenger boat in the morning, and sent us off into the river, heading north like Simon Bolivar in the 1800´s (only he didn´t have a motor). 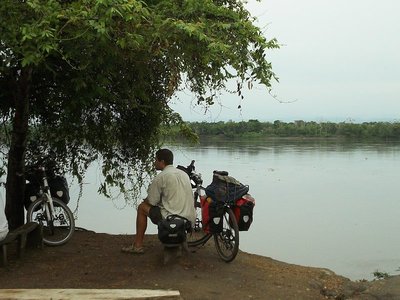 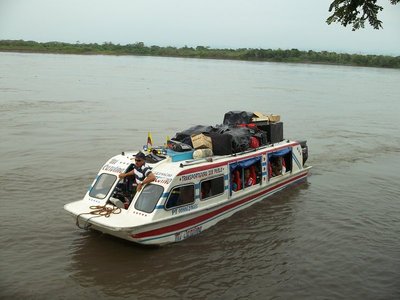 And El Guayabo was of the past. Back to Civilization and a new adventure. 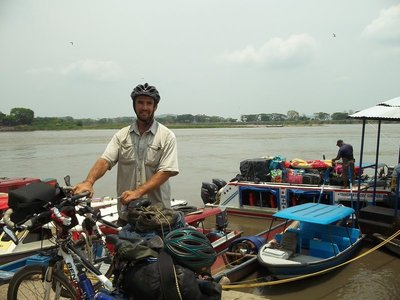