Under this mask, I`m really a nice person....

Now give me all your chocolate or I`ll run you over. 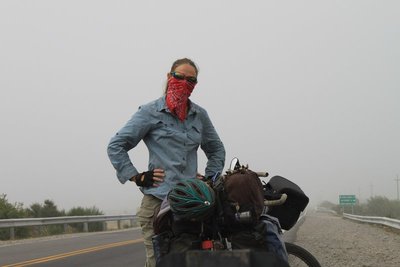 I have found out that there ain't no surer way to find out whether you like people or hate them than to travel with them. 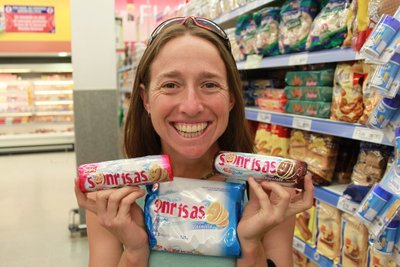 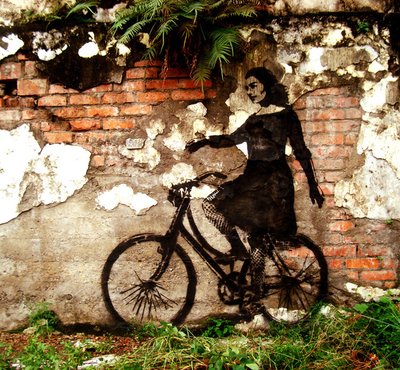 So what can I say. I have encountered some really rad people in the last week or so. New years came and went in a little town of San Martin, where I encountered Ivana and Harry. They literally helped me out and gave me my own apartment to stay in over the holidays right as there new born baby came home. Literally... they carried him home and I was perched on their doorstep waiting and ready to assess. All fingers and toes, check. Having traveled for three years themselves, from Alaska to Ushuaia, and Harry summitting all 7 high points in the World and writing guide books about them, they knew how important a helping hand was. So they helped me out. Gotta love èm. I do. 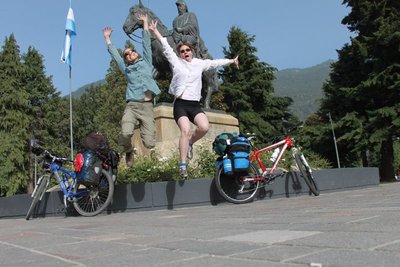 And then who shows up at my doorstep, but BETH, my maid of honor at my wedding. Came to join me for her very first bike tour! Very exciting. But I don`t know why they call it maid of honor, as I`ll be doing most of the cooking and cleaning. But we won`t get into that. So here is Beth, ready to seize the day. She doesn`t realize it, but she has been a rock star. The first 4 days have not been easy. Ya see, a volcano exploded in Chile and for some reason, all the ash has flown over to this part of the world. So we´ve been biking in a cloud of ash for the last couple of days and she has maintained a smile on her face. 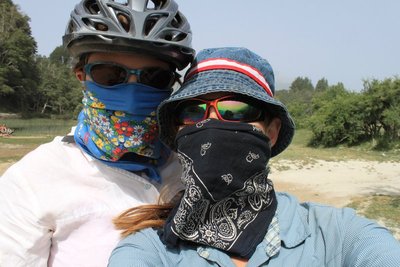 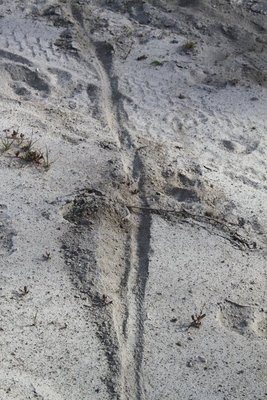 ... but all in all, it hasn´t been that bad. The views and blue sky peak out more than not, and because of the ash, the tourist levels have dropped substantially. So when we showed up in Villa Angostura, the most expensive town in Patagonia, we were blessed with Juani hooking us up with his family`s cabin. I met him on the internet (it sounds more swanky than it really is) and he is a traveler, so when I asked for a place to stay, he gave us this house to ourselves... for as long as we wanted.... for free. His family rocked too. So we made them choco chip cookies. Actually Beth made them, I ate them. So it was a good team. 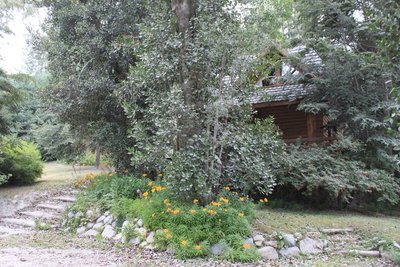 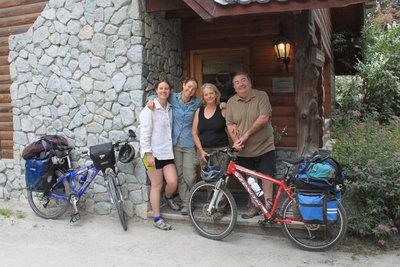 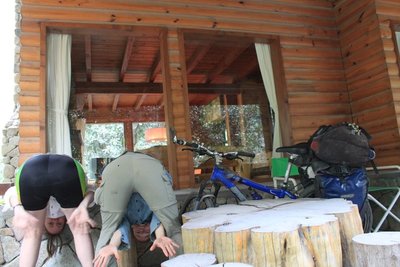 It`s very classy to dry your clothes next to the wine glasses says I. 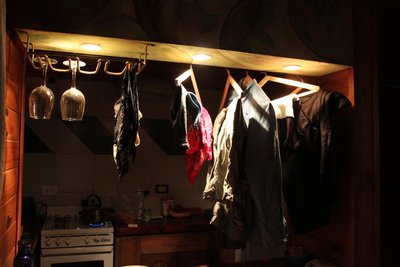 When the sky cleared, Beth and I headed to some National Park nearby and met Fred. I fell in love with Fred, even after I found out he was a she. But she traveled with me for 24 km through hell and high water, by my side, with a smile on her face. I planned to take her home, but Beth wouldn´t carry her on the bike. Thanks a lot Beth! 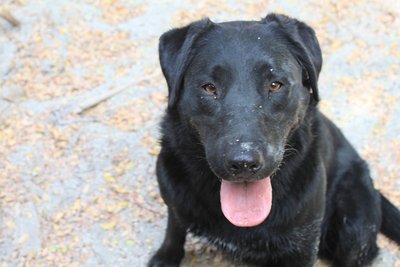 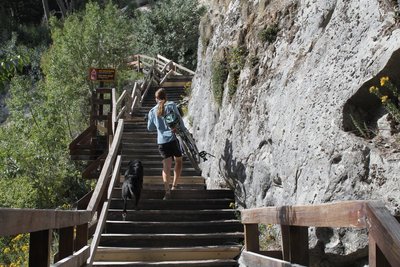 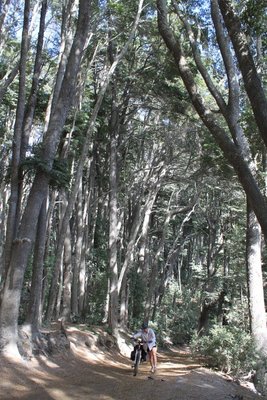 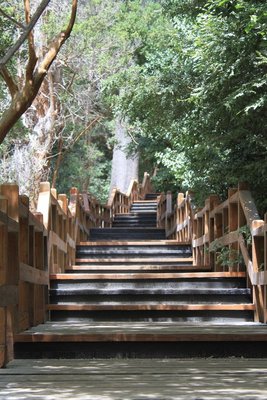 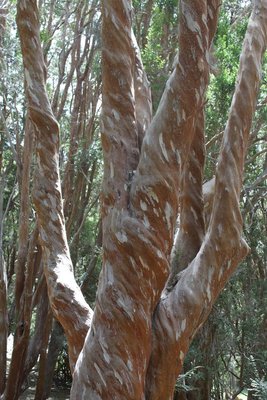 This is what life looks like when you want to take all the ash off a house after a volcano explodes nearby. These men took their shirts off just for us, but were fairly disappointed when we wouldn`t go play with them. 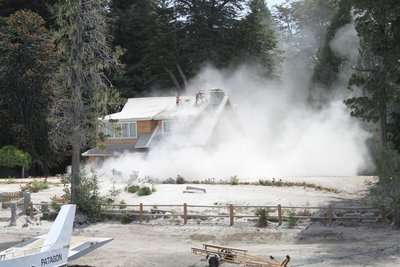 Don´t tell me how educated you are,
Tell me how much you´ve traveled.¨-- Mohammad 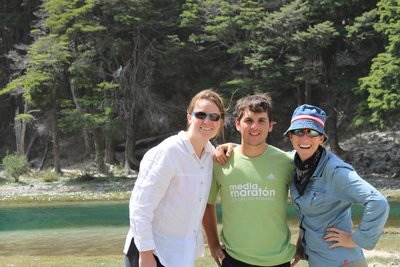 Ran into Javier on the road. What a cutie. It was his first day, 21 year old, so full of life and excitement. Except he forgot to pack a spoon or fork, and had to eat with ours, forgot to pack a lighter, and had to cook with ours, and forgot to pack water purifying tablets, so had to use ours. Boy did he learn a lot the first day. I showed him a good place I would camp, and he said ¨Ïsn`t that place a little bit dangerous.¨ I looked at him and said ¨Honey, you have got no idea the places I`ve slept.¨ Then when he found out I was married, his eyes widened and he said ¨Your husband let you go off on a bike trip.¨ First reaction, ¨Sugar plum, my husband does not control me.¨ He has a lot to learn about bike touring, and about American Women, and it was fun to teach him both.

So back on the road tomorrow with more doors to knock on. We`ve only encountered a volcano turning on, rain, biking on the beach, high torrential winds causing us to bike 60 km in 2 hours, and then 12 km in 2 hours. The best stories I`ll have to tell in person so Beth`s parents (and my parents) don`t kill me. And the best pictures I`ll have to show in person... so Beth doesn`t kill me. But all in all, it`s been a good first 7 days. 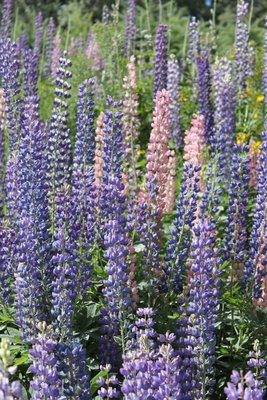 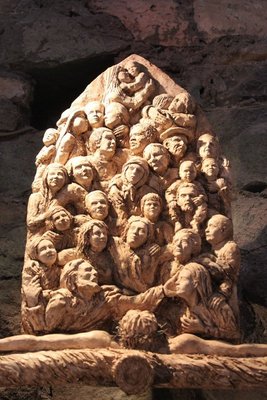 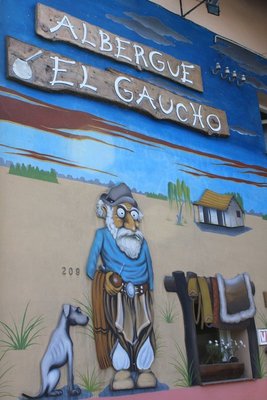 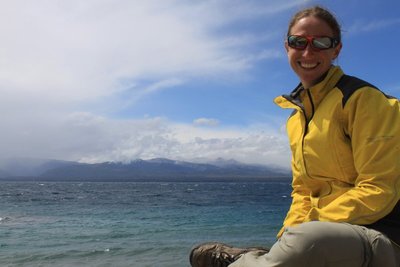