Accordions, whiskey, and a movement disorder

Stop when you hit the ocean. Or else it might hit you back.

The local police chief wanted to practice his English.
That was why he was paying us a social visit in the dining room of the big house where we were renting a room for the night. So Risa and I talked to him about our trip and our route, his family and his work. I wandered off to find a bucket of water for the evening´s ¨shower¨ and when I rejoined them, Risa had secured his phone number- and an invitation for us to stay with him and his family when we were to pass through Valledupar in a week or two. 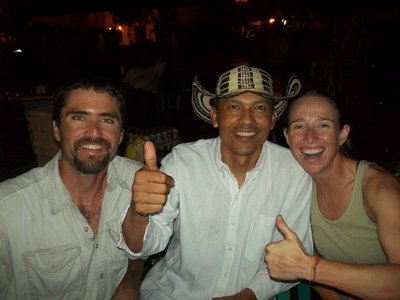 A week and a half later we rolled into town just in time for the annual festival of accordion music (and whiskey). The country´s biggest festival, the Vallento folk music is characterized by accordion players who are bigger celebrities than most rock stars. It is also characterized by Old Parr Whiskey, to the extent that Valledupar is often referred to as Valle Old Parr, as every other person is seen to be clutching either an accordion or a bottle of Old Parr Whiskey, or both. 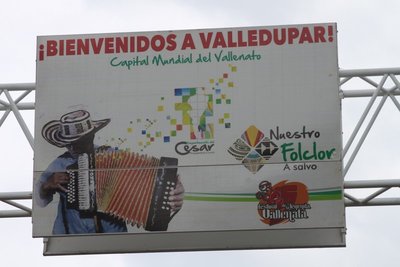 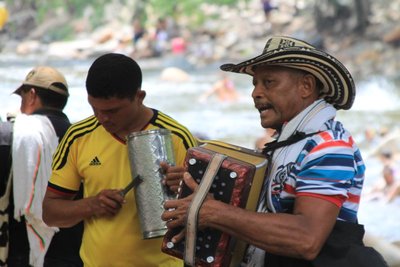 Every hotel in town was booked solid, and had been for months. Not to worry, the police chief had come home to see his family and we could stay with him! We even went out that evening to listen to music together, which wasn´t easy, as the main plaza was jam packed full of bands from all over Colombia, each with a small cluster of plastic chairs around them, all trying to out do each other playing faster and louder and all together making the most outrageous cacophony of sound imaginable. 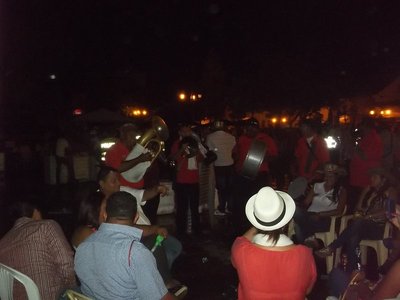 In the midst of this melee, Risa and I decided to try our salsa moves out on this accordion music...no easy feat under the circumstances, but even harder when considering we were surrounded equidistant by 3 different bands playing 3 different songs. We danced faster and faster to the beat of all three until finally finishing with a dramatic dip, when we looked up to see a crowd had gathered around us as we danced and was now clapping and cheering for us! A man rushed up to shake our hands and poured us each a shot of Old Parr, and then the music was off and running again. 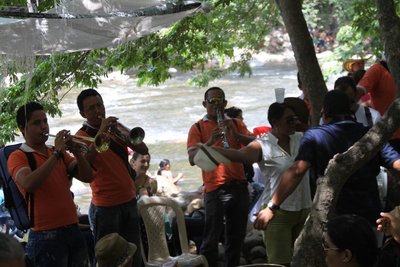 The next day after many thanks for the hospitality and farewells, we were off, headed west toward Cartegena and the end of our trip...or were we?

Each day found us in a similar routine as we crossed the hot, humid, and still region of the Rio Magdelena, leaving the cool following trade winds behind us. 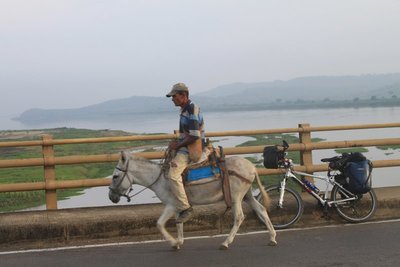 Awake at first light and on the road before the heat of the day gradually sapped all motive energy and found us seeking shelter, ice cream, and fruit juice, not necessarily in that order. We couldn't stop. Not that each day was an epic, though we had those too; we did manage to enjoy hammocks, coconuts, accordions, and flamingos, even as we took only one non-biking rest day in 17 days of otherwise perpetual motion. 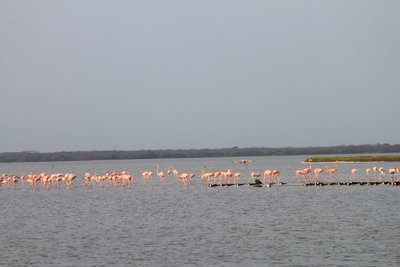 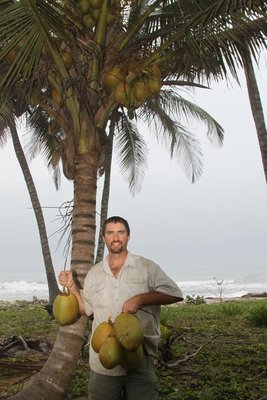 Then we hit the cross roads; turn right for Cartegena, left for everywhere else. Naturally we turned left, unable to take the direct route anywhere, and proceeded on our manic way until we hit the ocean again. There we checked ourselves into a non-brothel, non-dirtbag hotel with a kitchen, made ourselves some gringo pasta, and resolved not to leave our hammocks except to get more beer or fruit salad. And so our perpetual motion disorder was, if not cured, put into remission for awhile. 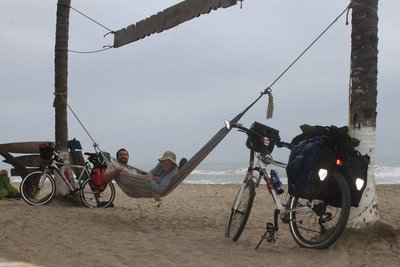